Throughout history, the church of Santa Maria Madrona in Poble Sec, has changed hands on several occasions and has lived through many events, including its destruction and reconstruction at different eras. This historical monument has been linked to different cultures and identities, which makes it an especially interesting place to study and understand.

The site has not been employed only for religious purposes. In fact, it has been used for quite different ends. The church was inaugurated in 1888 by Queen Regent Maria Cristina. During the Tragic Week in Barcelona, 1909, the Church of Santa Madrona in Poble Sec was burned down. At the beginning of the 20tth century, a 50-metre-high tower was added. However, in 1936, after the start of the Civil War, the tower was demolished. The Republican military considered that such a visible landmark was a too obvious target for enemy aviation. The parish church was occupied by the Public Order Commission as part of a new, rationalist, lay educational project. However, the Commission for Wood considered that its structure would be more useful at the service of industry and the church was given a triple use: garage, vehicle repair workshop and warehouse. 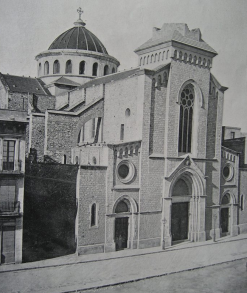 Nowadays the church is used as a religious space. What makes it different and worthy of studying is the way that it has successfully adapted to this new globalized era in which people and communities from all over the world are more interconnected than ever and hence senses of place and identity are being increasingly challenged. By interviewing one of the catechists of the Santa Madrona church, Susana, and doing some research work, we have been able to understand how the church has incorporated the global into the local and vice versa. This church is a perfect example of how places can be sites of multiple identities and groups and, at the same time, retain a sense of locality.

Susana: I began when I was 25. Before, there used to come a lot of people, families came because they had faith. Nowadays young people share other ideas, customs and don’t practice the religion that much so they don’t come to church very often. When some years ago a great wave of immigrants started to arrive, we realized we had to transform the church so more people would come and also to integrate them into this community. A lot of foreign people were arriving to the neighborhood and were looking for a safe and welcoming space where they could practice their different religious rituals.

Susana: This is a parish that shares all its spaces with different communities. Sometimes the locals ask for the space to celebrate feasts. There are several Chilean, Ecuadorian and Bolivian associations that ask for it too. The same happens with neighborhood associations. Every Saturday there is a Philippine mass where both the Filipino and local community get together. The Filipinos do their own mass, they sing in their language, Tagalog, and in English. Some weekends, we also do multicultural feasts and these parties are the ones that most people attend to. People from different communities gather and celebrate. The main objective of this church is to collaborate with people who need it, both locals and outcomers. We are open to any kind of collaboration. In February, a group of Honduran people used this space to celebrate their virgin’s day, who they call the “Virgin of Suyapa”. She is an ethnic virgin that the Hondurans adapted from the Christian religion.

Susana: They have different ways of performing their rituals. The Filipinos are much more catholic than us, more devoted. We put a lot of effort to make them feel at home, but sometimes is very difficult. A lot of Latinos attend mass, sometimes there are more than locals, and they are also very devoted in their home countries, but they don’t get that much involved in here. Some of them just can’t and others don’t want to. Here they feel different because it’s not their place of origin and a lot of times they make commune and it’s difficult to fully integrate them.

We always try to do our mass taking into account all the people that assist, we want all of them to feel integrated. But this space is not going to have the same meaning for everyone, even between the locals there are differences, obviously. We do bilingual masses – Catalan and Spanish – so people that don’t speak Catalan and are also from other parts of Spain want to come and can feel more integrated in this space.

Susana: Yes, of course. This exchange and sharing of cultures is something very positive and rewarding. People get to experience different ways of practicing the religion and they also learn from other cultures. Different communities integrate into one, the community of the church. To me, immigrants and people from abroad have become a part of the church’s family. There is no distinction, we look for a complete integration and hence the mass of this community is a mixture of cultures.

What we really want for them is to come because they feel comfortable, as in their parishes of origin. That’s what we are looking for, to create a multicultural community where people feel totally integrated.

From Susana’s interview, we can understand how this church has helped people coming from different places find their identity in the middle of all the movement and change. This space in particular has verified Doreen Massey’s theories about “senses of place”. First of all, we can determine that places don’t have one single identity, but instead they are a mix of multiple identities. This church is the perfect example since it’s constituted and shaped by different identities and actors that come from distant parts of the world, which shows that there are real connections between any local place and the wider world in which is set. This is a place that is available to everyone, a site of multiple identities and histories.

Thus, places don’t have single communities. Santa Madrona is composed of several communities that practice religion in different ways and have a different sense of place. A person from the neighbourhood that has been part of the church’s community for years and has a large experience of the place, won’t have the same sense of place as a foreigner new to the community. And even within the same community, the same location can be meaningful through different senses of place. You identify with a place when you feel that you belong to it and, at the same time, this sense of place can happen at different scales. The church provides both a local and global sense of place. Global processes are taking place in a local place, the church of the neighbourhood, and hence, when a local neighbour attends a Filipino mass, he or she is being part of the global. Thus, we can conclude that places are not fixed neither bounded by the local. Instead, identities move across them, having migration and cultural mixing a great influence. It is okay to seek identity in place because the identity is never fixed and bounded (Cresswell, 2005).

Massey also talks about places as processes of social relations. It is the collected stories and experiences of different people that happen at a place what defines it. The church is a place constructed by social relations. It is a point of intersection between the local and the global, a meeting point for both locals and outsiders where a great cultural exchange happens. The place of the church can be understood as a dynamic process, it is not static. By giving the global outcomers a place where they can share their culture and experiences with the locals, the place is constantly given new meanings and interpretations. “Places do not come with some memories attached as it by nature but rather they are the contested terrain of competing definitions” (Harvey 1996, 309).

However, in this globalized era, senses of place can be problematic since people more than ever want to keep a sense of belonging, something they can hold on to so their identity is not lost. This can result in reactionary nationalisms, competitive localisms and introverted obsessions of heritage (Massey, 1991). Yet such an historically sacred and traditional place such as the church of Santa Madrona, has been able to modernize its space and adapt to the current global-local times. The church is a place that helps others to not feel “out of place”, to find their identity in a constantly evolving world.

The simple idea that particular groups or communities belong in a particular place is wrong. The church is defined by the outside and its uniqueness comes from the different actors and the social interactions between them. The global finds its place in the local community and vice versa. This progressive concept of place is a way to reconcile local identities and differences within a globalizing world. Places should be open and hybrid, accessible to everyone. The church has proven that it is not a place seeking to distance itself from the world but that it is created by constant changing ingredients of the wider world. It is a very positive and rewarding way to integrate the global and the local.